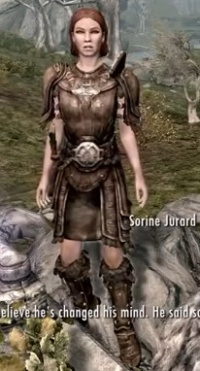 Sorine Jurard, one of the NPCs you have to recruit during the quest "A New Order" in Skryim: Dawnguard

A New Order is a main story quest in Skyrim: Dawnguard.

It is only available to Dawnguards.

The quest A New Order starts outside of Fort Dawnguard

A New Order is given by Isran, the leader of the Dawnguard.

I've told Isran what I learned at the vampire castle. Isran has asked me to find Sorine Jurand and Gunmar, and bring them to him.

Speak with Isran outside Fort Dawnguard

Travel to Gunmar's Location and help him kill a Cave Bear

Travel to Sorine's Location and help her find a Dwemer Gyro. Sorine's Satchel containing those gyros is on the river bank nearby.[1]

Go back to Fort Dawnguard.

Bloodline, where you escort Serana to Castle Volkihar and then refuse Lord Harkon's gift of blood (which would have made you into a Vampire Lord

Prophet, in which you have to locate Dexion Evicus, a Moth Priest to help you decipher the Elder Scroll (Sun) that Serana is carrying and learn about the Prophecy.