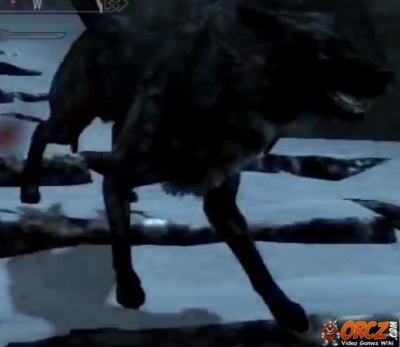 Wolf is a foe in The Elder Scrolls V: Skyrim.

"The wolves of Skyrim are feral, savage beasts, that work in packs to take down any prey available - be it animal or man." - Loading Screen

The wolves will only attack if the Dragonborn enters into their territory. They will howl, generally giving a warning of their coming attack. They rarely attack in a straight line, preferring more ambush tactics.

If the Dragonborn is a transformed Werewolf then the wolves will remain non-hostile. They actually have a chance to start following the dragonborn.

Throat of the World