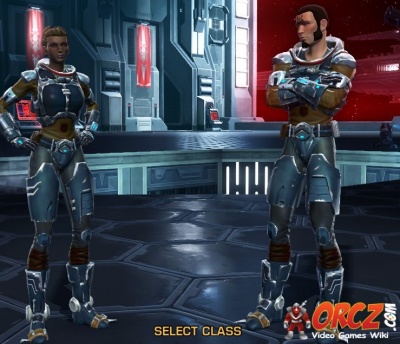 "Bounty Hunter" is a class in Star Wars: The Old Republic.

A thorough professional, the Bounty Hunter trains mind and body for every possible job. Blasters, flamethrowers, missiles, energy shields, jetpack and the best armor money can buy-the name of the game is preparation and versatility.

Preparation is the Bounty Hunter's best defense, and cutting-edge protective gear is standard equipment for most Bounty Hunters. Artisans spend months and even years handcrafting the Bounty Hunters' heavy armor to ensure it offers superior resistance to all manner of weaponry, and that each suit will still allow maximum flexibility and versatility. Offense is just as critical as defense, however, and powerful weaponry is necessary for Bounty Hunters who might have to shoot their way out of a messy situation. It's not unheard of for a Bounty Hunter to spend as many credits on an advanced blaster as others might spend to purchase an entire starship.

The Bounty Hunter is a heavily armored fighter who specializes in the use of a number of heavy weapons. All Bounty Hunters are skilled in the use of blaster pistols, as well as missile attacks and close-range flamethrower barrages. Their blasters can be loaded with different gas cylinders, allowing them to change the functionality of their blasters for the needs of any battle.

Bounty Hunters who become Mercenaries learn to use a second blaster, and learn many new ranged attacks, including specialized tracer and heatseeking missiles, new dual-blaster barrages, and new explosive attacks. Some Mercenaries may specialize in combat medicine and become effective medics.

The Bounty Hunter has the following specializations:

Whether working for credits or principle, the Bounty Hunter pursues targets with dogged determination and methodical precision. Bounty Hunters are renowned for their versatility on the battlefield and their ability to go toe-to-toe with Force users. Their legendary abilities in this arena have earned them the nickname "Jedi Killers." Whoever they must face, however, the Bounty Hunter comes armed with the most-advanced weaponry on the black market, packing heavy firepower but always keeping a variety of tricks and gadgets ready to go.