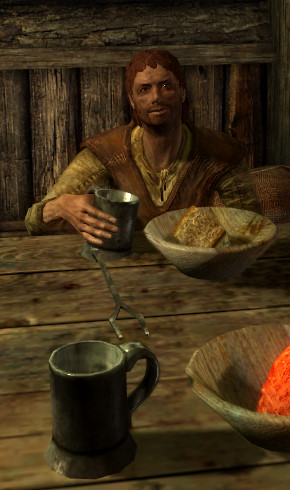 Addvild, a farmer from Snow-Shod farm, eating dinner at his home in the farm near Riften

Addvild can be found working on the farm during the day, and inside his house, a wooden shack in the farm, during the evening and night.

Addvild does not sell anything, however he will buy from you the following items:

All these items can be harvested in the farm.

Addvild is not known to be involved in any quests.

Addvild often talks about how gracious he is that Vulwulf Snow-Shod lets him work in the farm, considering he is not part of the family.

Addvild also says that he is glad that guards are watching the farm.