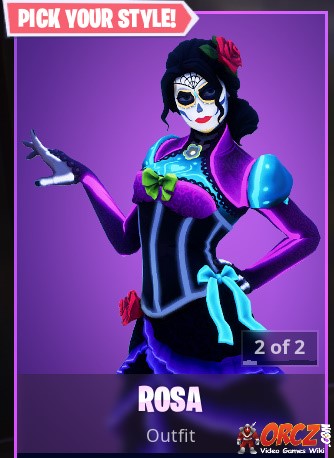 The Rosa Outfit in Fortnite BR. You can buy it from the Item Store for 1,500 v-bucks.

Rosa is an outfit in Fortnite Battle Royale.

Part of the Muertos Set.

Reactive: Glow in the dark.

Buy this outfit from the Item Shop.

Was to To be released 1 time to celebrate MEXICO’s 1 day holiday, Dia De los Muertos(a 1 day Mexican Holiday) Epic hinted that it was a 1 time release through their marketing making this set one of the rarest out there. Rosa is supposedly a remake to Ghoul Trooper with some people saying it’s Ghoul Trooper v2 while Dante is Skull Trooper v2. Intended and marketed to be sold for that day only.

Bonus: The Rosa skin comes with the Epic Calavera Back Bling.

One of the rarest back blings in Fortnite.