Breath of the Wild: Recipes 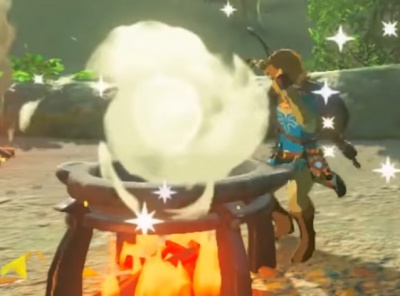 This page will have all the recipes in the game The Legend of Zelda: Breath of the Wild.

If you find a new recipe, please add it to the recipe list below! But please take care to check that it is not a generic extension of an existing recipe, as described below. Also, as there are sometimes random bonuses applied to a cooking session, please ensure to record the normal (unboosted) result; you may have to repeat the recipe (you can tell by the jingle played). Check back often for new recipes that have been discovered!

These ingredients can be added to any elixir, but do not count as either "critters" or "monster parts" for recipe purposes.

These dishes also give extra stamina if they start with the word enduring.

Add electric Safflina to Raw meat of any type

The following hearty foods are available, with their corresponding heart values (in order of heart values):

These ingredients can be combined in almost any fashion and their hearts will be added together. For example: 3 Hearty Bass and 2 Hearty Truffles will create one dish with 8 additional hearts. All dishes, when cooked, restore full health, and since there is no time limit, the addition of ingredients like salt, spices, and raw meat, which all contribute to life restoration and/or duration, have no effect on maximum heart dishes, except to increase their resale value. If dishes are being cooked simply for hearts, do not waste the meat/spices.

The following table shows some example dishes which are possible, but it is worth noting that ingredients like eggs, wheat, raw meat, salt, and butter are all being wasted in these recipes, and are better used in cooking other dishes.

Hearty dishes are reliably the most useful, and are a waste to sell. Always choose to sell non-hearty dishes.

Another important point is that the total number of hearts you can have (regular plus temporary) appears to max out at 30 (two rows of 15). So if you already have ten regular hearts from trading in spirit orbs, its a waste to cook a recipe that will add 25 hearts (i.e. 5 Big Hearty Radishes) when it will give you no more of a bonus than a recipe that adds 20 maximum hearts (e.g. 4 Big Hearty Radishes). This is even more true later in the game, where (depending on how you spend your spirit orbs), your heart total can get even higher.

Finally, there is a small chance that these ingredients yield a bonus heart naturally, even on non-blood moon days.

These dishes can be useful in many ways, such as if you don't have a lot of good things to help you battle or if you are travelling somewhere dangerous.

If you are only using them for extra hearts, It is a waste. Using them when you need them is vital.