How To Get Legendary Loot[edit]

The best way to get orange (Legendary) items is to farm the bosses at the locations listed below. Drop rates for orange rarity items are low, but after you have killed the bosses enough times they will eventually drop legendary loot. The average drop rate for Legendaries are about 5% at maximum. (Around a 1/20 chance to drop), but many have lower drop rates. For example, Sledge's Shotgun has a drop rate of 3.5%. Any legendary can be obtained as a world drop from any entity or boss which is a 1 in 10000 chance.

All of the DLC raid bosses in the game all have a chance to drop ANY legendary item.

If you own Mister Torgue's Campaign of Carnage DLC, you can buy Torgue Legendary Weapons from Torgue Vending Machines using Torgue Tokens. This is the easiest way to get weapons such as the Unkempt Harold. 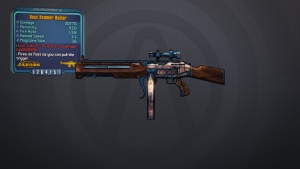 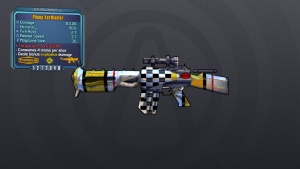 Does not drop from Bonehead 2.0, as many people believed. Bonehead 2.0 drops the similarly named Bone Shredder SMG.

Drops from Mobley (The Dust)

Drops from Warlord Slog in the 6th (repeatable) round of the Magic Circle of Slaughter In Tiny Tina's Assault On Dragons Keep, also drops from Duke of Ork (a leveled up Warlord Turge)(Not for me it hasn't 12/19) in Mines of Avarice. After you completed all 5 rounds of slaughter you get a badass round.

Drops from Laney White (The Fridge) and loot midgets and The Bunker (confirmed).

Drops from Rakkman (The Fridge) and Loot Midgets

Drops from Wilhelm (End of the Line), Pyro Pete, and Loot Midgets.

Drops from Savage Lee (Three Horns Divide), raid bosses, legendary loot midgets, the warrior, or it may be purchased from Torgue Venders in Mister Torque's campaign of carnage DLC for 613 Torgue Tokens.

Drops from King Mong in the Eridium Blight (random spawn).

Drops from the Black Queen.(the dust, behind ellies garage)

Drops from The Warrior (Vault of the Warrior), loot midgets,URANUS (Fight for Sanctuary DLC), Handsome Sorcerer, and Pyro Pete the Invincible.

Drops from The Warrior (Vault of the Warrior), Handsome Sorcerer, Loot Midgets, and from Torgue Venders in the Torgue DLC.

Drops from Old Slappy (The Highlands - Outwash) and Loot Midgets.

Drops from Gettle (The Dust), and loot midgets.

Drops from The Warrior (Vault of the Warrior)and loot midgets, and The Handsome Sorcerer (Dragons Keep)

Drops from BNK-3R, the Ancient Dragons of Tiny Tina's DLC, and loot

P.S The 94% Sham is very sought after and very rare. Happy Hunting!

Drops from Henry (The Highlands-Overlook), and Pyro Pete.

Drops from the Spycho, and Pyro Pete.

Drops from Ultimate Badass Varkids, loot midgets, and even in a chest.

Drops from any lootable source by random.

Drops from Wilhelm, loot midgets, and Torgue Venders in the Torgue DLC.

Drops from The Warrior (Vault of the Warrior), Handsome Sorcerer, and loot midgets.

Drops from Vermivorous the Invincible, and Dragons of Destruction (Tiny Tina's Assault on Dragons Keep DLC).

Drops from Vermivorous the Invincible, from other raid bosses (not Crawmerax), chubby enemies, and loot midgets.

Completing level 5 of "...To Pay the Bills" Challenge

Henry, The Highlands near Overlook (mission: Best Mother's Day Ever)

Save file from the original Borderlands

33 are earned from completing challenges.

8 are Item of the Day in shops found randomly (one for each manufacturer).

2 are prizes from slot machines (2 for each class).

14 drop from enemies and bosses.

They can also be purchased as DLC.

Orange (legendary). Reward for having at least 15 legendary items.